This report is a summary of a project I began in 2014 to walk the length of the E4. Each year I walk a section.

Tarifa in Spain to Cyprus

I have walked the E4 from Tarifa in the far south of Spain to Cyprus in 12 stages of 4 to 8 weeks in length (the longest I can manage without seeing my wife)! For navigation I used a Garmin gps with the Garmin maps for Spain, France, Switzerland, Germany, Austria, Hungary and Serbia, plus gps maps from others for the Balkans and Cyprus. In addition I downloaded gps tracks of the paths that formed the E4 from various websites including Traildino.com. Accommodation ranged from wild camping in a lightweight tent to posh hotels and many things between, depending on availability (a convent, a Buddist retreat, a castle and straw in a barn were some of my more unusual nights). A few sections are difficult without wild camping unless you are good at arranging taxis, especially if walking out of season. The mobile phone version of Booking.com proved useful for booking ahead (and Revngo.com in Hungary) as my knowledge of foreign languages is not good, although hotel receptionists / owners also telephoned ahead for me and tourist information offices were helpful. The Easyjet booking app meant I could book my flight home on the day that I left, so rushing to meet an arbitrary deadline was not necessary.

I started the first section from Tarifa at the beginning of September 2014 which was far too hot, especially as there are some long days between places with accommodation. Consequently I took a break at Ronda for 10 days until it was a little cooler. This first trip took me across Andulusia into Murcia. I followed the southern option of the E4 in Andalucia which took me through popular tourist areas such as the Alpujarra and quieter areas like the Sierra de Baza. In February 2019 I also walked the Northern alternative which has a lot more Olive trees but also mountainous areas especially after Alcala la Real. Both routes join at Pueblo de Don Fadrique, and the trail enters Murcia. John Hayes' E4 blog talks of having to climb fences in places but they have rerouted the path at these points so this is no longer necessary.

I completed the section from Cieza in Murcia, through Valencia region to Solsona in Catalonia in February and March 2015 at a much more pleasant walking temperature. Any snow and most rain in Spain was falling further west. Less of a tourist area, there were pleasant suprises such as the Park Els Ports at the start of Catalonia. The owners of friendly and inexpensive hotels in little towns welcomed me, often as their only customer!

The third section crossed the Pyrenees, the exact route of the E4 here was a bit vague to me at the time so as I had followed the GR7 through most of Spain, I continued on the GR7 through Andorra into France. I walked this section as far as the River Rhone near Montelimar in June and July. There was still snow on the Pyrenees but I managed to avoid the steepest banks and some refuges on route made things more comfortable in some stormy weather. The flowers were particularly colourful. After the mountains of the Pyrenees, the E4 goes through various other hilly regions, the Montagne Noire, the Cevanne and the Ardeche; the last two were well supplied with organised campsites, gite d'etapes (dormitary accommodation) and tourists. By the end of July it was starting to get a bit hot.

The fourth section, completed in September and October 2015, was from the River Rhone near Montelimar, along the GR9 to Switzerland and then across the Jura mountains of Switzerland on the Chemin des Cretes (aka Jura Hohenweg). The GR9 was a bit frustrating as it took a decidedly wiggly course in order to go over every montain possible! The E4 in France crossed the Way of St James a few times. Once I hit Switzerland the route was more of a straight line along the limestone ridges that form an arc across the North of the country, with tremendous views to the south. Accommodation was more expensive in Switzerland although even the more expensive hotels often had dormitary accommodation in their attics, which was much cheaper and which I only had to share at weekends.

I walked the fifth section from Kreuzlingen on the Bodensee to Vienna in August and September 2016. The first few days around the southern side Bodensee was flat and I was able to use campsites to keep costs down. There were plenty of opportunities for refreshment but I should have brought my swimming trunks to join others in this massive lake.

I then crossed the Bavarian Alps on the Maximiliansweg. This (and the Salzkammergut that immediately followed) was definitely the toughest part of the E4 so far. Although there were days with large ascents and descents in France and Switzerland, on this section every day seemed to involve climbing well over a 1000m. There were some slightly scary bits if you are afraid of heights, but there were also wire ropes and steps installed. A polpular area for hikers.

The WWW04 across Austria to Vienna can be split into three sections. The first, after the historic and beautiful town of Salzburg, involves some big ascents and descents. In places there are sections of beautiful limestone scenery with collapsed cave systems, potholes etc.. The second section has rolling hills, as you go up and down the total ascents in a day can be large, but fortunately the paths and roadways you follow are less steep. There were fewer hikers on this section. The third section is through the Vienna woods, while there are grassy fields in this section, long sections are through tall beech trees.

My sixth section was from Vienna to Budapest in late February and March. After Vienna the E4 follows the WWW07 through the Danube Forest National park, then along flat land bordering Slovakia until the Neusiedlersee, a large reed lined lake with geese and gulls. As it was March there were no ferries so I paid for a water taxi. It then became more hilly as I reached Koszeg in Hungary.

The E4 in Hungary follows the Blue route (Kektura). There were some long stretches through woods (beech, oak and pine) although castles, stately homes, Lake Balaton, a stupor, the remains of volcanos, kilatos (towers that give views over the tree), early flowers and blossoms and other sites added to the interest.

Both the WWW07 and the Blue route take an extremely circuitous route which can be frustating but is designed to take you to or near the main sites.

My seventh section in June and July was entirely in Hungary from Budapest to the village of Nagykereki. The first part was over hilly, wooded country on the Blue route (Kektura), with some large daily ascents in places. A lot of trees, although occasional Kilatos (lookout towers) allow you to look over the top of them. The meadows were full of colourful wild flowers although mosquitoes were an issue. After the town of Satoraljaujhely I followed the Alfoldi Kektura (Great Plains Blue route). This was very different being either flat or with very low sandy hills. Much of it was forested, although there were meadows, and vast fields of maize, sunflowers etc.. Some of the best parts were on the embankments of drainage ditches. For more details including some border problems see www.johnpone4hungary.blogspot.co.uk)

For the eight section I continued on the Alfoldi Kektura to Szeged, then headed south through Serbia to Belgrade before turning east to Veliko Gradiste, a town on the Danube. This section of the Kektura is across flat plains, often on embankments beside tree lined rivers or drainage channels, through agricultural land and parts of the Koros-Maros National park with various birds, animals and flowers to spot. In Serbia the E4 route crosses Voyvodina, the southern continuation of the Hungarian plain with much Hungarian spoken in the north. On reaching Belgrade (Beograd) the E4 route broadly follows the Danube passed castles and in more hilly landscape (see www.johnpone4serbia.blogspot.co.uk for more details)

My ninth section took me from Veliko Gradiste on the banks of the Danube in Serbia to Sofia in Bulgaria. A lot of climbing up hills and mountains initially in the snow in March and then with sweat dropping off my nose in April. Some notable mountains included the pyramid peak of Rtanj, the remote Devica range and Babin Zub (Grandma's tooth). There were natural limestone bridges, canyons, monasteries and water rising out of the ground. The route is not officially defined in any detail and I struggled with some overgrown paths, however, some home baking and a glass of rakija made up for any difficulties. On the last stretch from the Bulgarian border to Sofia I followed the Sultan's trail as the E4 has not been defined here.

The E4 through the scenic Rila and Pirin mountains south of Sofia (my tenth trip) is well defined, popular and relatively well served with mountain lodges (of varying standards). At around 2000 metres it crosses many ridges and summits and some scrambling over rocks is required (see www.johnpone4bulgaria.blogspot.co.uk).

On reaching Greece I followed the E4 to Florina, Mount Olympus and Kalampaka. Crossing a number of mountain ranges, plus some plains the E4 passed large lakes, pleasant villages with plane trees shading the card players, churches and monasteries, most notably those of Meteora on rock pillars. While Mount Olympus attracts many hikers for the rest of the route I was a rare curiosity to local people.

My eleventh trip was through the pine covered Pindus mountains, across the Peloponnese and then across Crete. The Pindus mountains are very much alpine terrain and the E4 is not well defined. In the Peloponnese by contrast, two volunteers (George and Rolf) and sponsoring hotels help maintain the paths. A more varied section, the Peloponese has its fair section of mountains, but also includes walking up a narrow gauge railway and the ancient site of Mystra. A weekly ferry took me from Gythio on the mainland to Kissamos in Crete. Many people walk the popular sections of the E4 in Crete, which is much dryer and rockier than the E4 walks in Mainland Greece. The coastal section is beautiful and later there many mountains to climb (to over 2400 metres). (For more details see www.johnpone4greece.blogspot.co.uk).

Walking a circuitous route across Cyprus was my final trip and the end of the E4. Not as dramatic as some parts of the E4, the Troodos mountains and the little villages made it worthwhile. (For more details www.johnpone4cyprus.blogspot.co.uk)

In addition to completing the above I walked from Cabo Sao Vicente in Portugal to Tarifa in Spain as a possible extension of the E4, see my blog of the trip www.johnpone4.blogspot.co.uk. 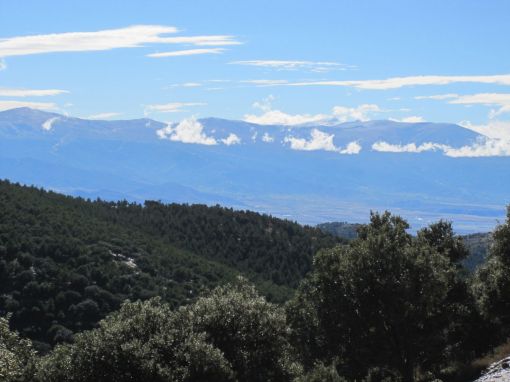 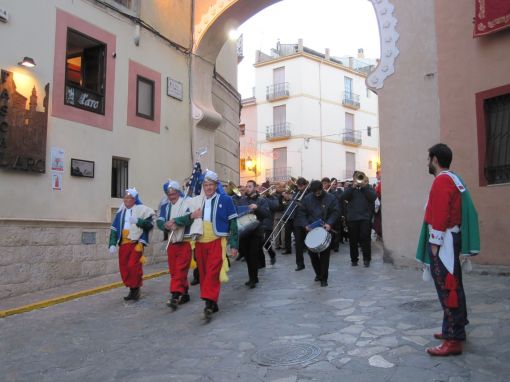 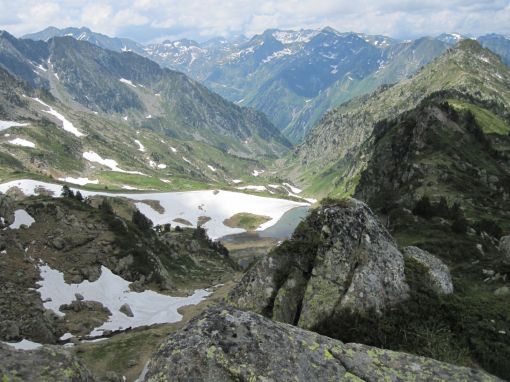 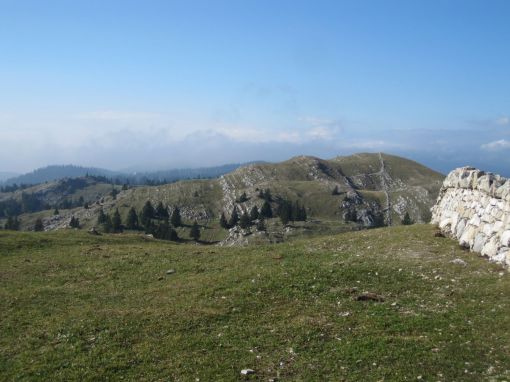 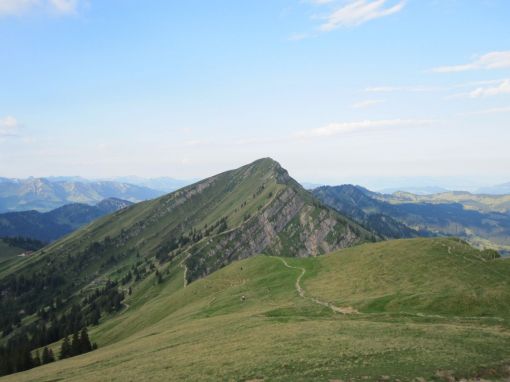 Trail along ridge from Staufner Haus to Sonthofen 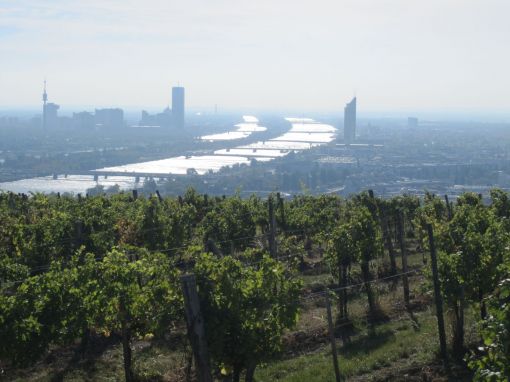 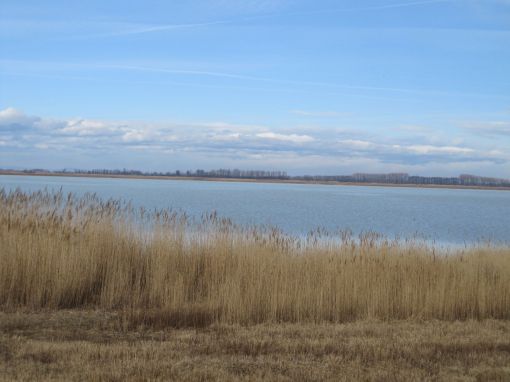 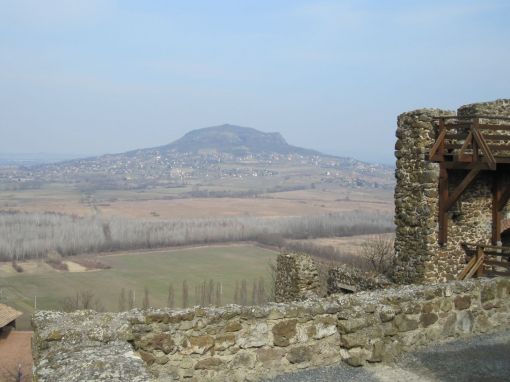 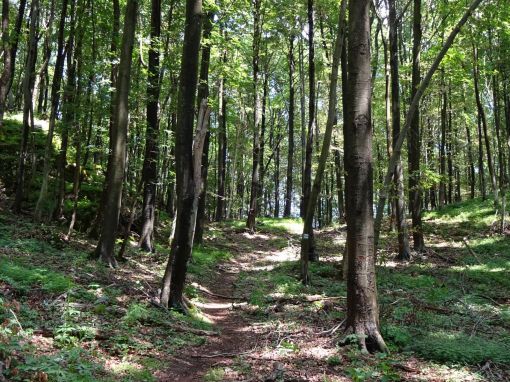 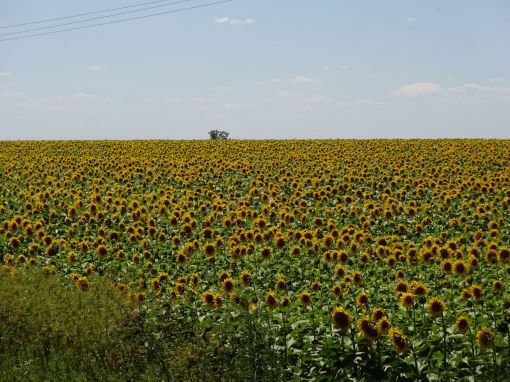 Field of sunflowers on Great Plain 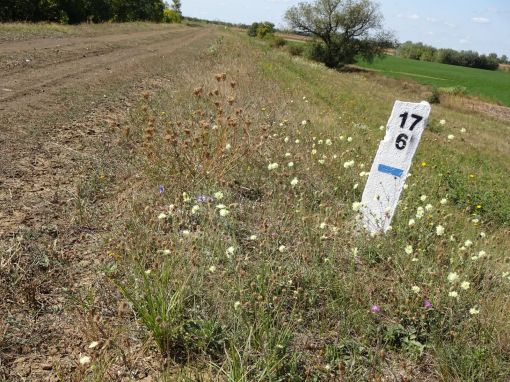 Milestone on river embankment in Hungary, the blue line shows it is on the Alfoldi Kektura Centre of the town of Zrenjanin Fishing on the Danube as seen from Smederevo Castle The famous Koncheto saddle at 2810 metres that the E4 crosses, not as scary as it looks!

Path up Mount Olympus to Refuge A
[invoegen