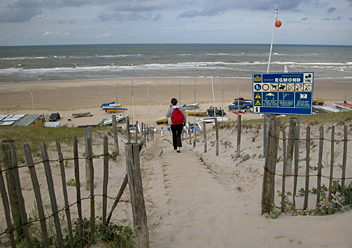 The Dutch Coast Path – Hollands Kustpad - takes us from Hoek of Holland through the cities of The Hague and Haarlem, to the north to Den Helder, a Dutch naval base. These coastal areas of South and North Holland are a treat for walkers, as a coastal walk should be.

On the origin of this land: the coastline is formed by a continuous row of sand dunes, created at various times in history by the interplay of rivers, sea and wind. Only in one part in North Holland, the dunes give way to an impressive dyke, the Hondsbosche Zeewering, to protect the hinterland. The dunes that we now see are not that old. On the inner side are remnants of older dune formations, which can be traced back to Roman times. These sand deposits have usually been removed, leaving behind a fertile and well drained soil, ideal for the cultivation of tulips and other bulbs. In the months of April till June, the central and northern part of the trail turns into a colourful spectacle of flower fields.

Behind the dunes lie the low coastal plains, once marshes, now drained polders.

The path takes us through these predominantly dune areas, jewels of landscape, beautiful in all seasons. Surprising how quiet it can be here, given that this is the most heavily populated part of the Netherlands. On some stretches, we walk along the beach, elsewhere we may pass old mansions surrounded by woods. In the seaside resorts and fishing villages (nowadays the same thing) we are welcomed by an exuberant atmosphere of french fries and happy people.

The trail is part of the North Sea Trail, and also of the E9, which follows the coast to Portugal. Incidentally, you might read "Visserpad" and "Duin- and Polderpad"; these are older names of this same coastal trail. (HN)