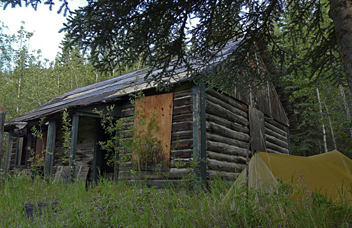 Although the Telegraph Trail Preservation Society no longer exists (abolished in 2006) the organization did manage to restore and preserve approximately 100 km of this road for recreational use. Near Blackwater River, The Telegraph Trail intersects with the Alexander Mackenzie Heritage Trail.

The Yukon Telegraph Trail was almost 3000 km (!) in length and connected Dawson City to southern Canada. In 1936, the history of the Telegraph Trail came to its end. Nowadays, those who venture out on the original route, now a wilderness trail, will find scarce remains of these times. With a little imagination, you can walk back in history. There are backcountry campsites at several locations along the trail.