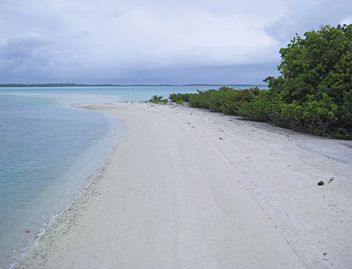 The British Indian Ocean Territory, or BIOT in short, is the official name of the Chagos Archipelago. It is located in the Indian Ocean, about halfway Africa and Indonesia, and consists of different groups of atolls, which each in turn have several islands around a lagoon. The total land surface measures only about 63 square kilometers, but including the total marine environment the area adds up to some 15000 square km. The largest island Diego Garcia has been a joint UK/US military facility since the 1960's, following the eviction of the entire native population, known as Chagossians or Ilois, to Mauritius.

In April 2010 Britain declared the Chagos Islands to be the world's largest nature reserve, with the creation of the Chagos Protected Area.

There is not much hiking that we know of, but some people sailing there report they went walking on some of the islands, and mention existing paths on the island of Boddam for instance.